As part of the commemoration of the death of Napoleon I in 1821, the commune brand network “Ville impériale” is organising several events.

We advise you to contact directly the institutions for the latest updates.

See the detailed programme → Many events are likely to be added to this programme and to change dates, given the current health conditions. For the most up-to-date and detailed information possible, please refer to the pages dedicated to the bicentenary on the website of the city of Ajaccio

Brienne-le-Château, “Imperial City” since 2012, and dear to the heart of Napoleon I since his childhood, is celebrating the 200th anniversary of the Emperor’s death through a temporary exhibition at the Napoleon Museum and various events.

Exhibition > Entre l’Aube et la Marne, 1814, la naissance d’un mythe (between the Aube and the Marne, 1814 birth of a myth)
27 May 19 September 2021
The exhibition at the Napoleon Museum will focus on a rare piece: the campaign bed used in 1814, donated by the Veuve Clicquot Champagne House (in Reims).

Musée Napoléon, salle de la Chapelle
34, rue de l’Ecole Militaire -10500 Brienne-le-Château
Housed in the former Royal Military School where the young Bonaparte was taught for 5 years, from 1779 to 1784, the permanent exhibition of the Napoleon Museum deals with this historic figure through 4 strong themes, between legend and reality, and highlights his 3 visits to the town of Brienne-le-Château, at the most important periods in his history, the dawn, the apogee and the twilight of his life.

Animations
– 15 May 2021: La Nuit des Musées (Night of Museums) (activities and games around the 1st Empire)
– 12 June and 10 July: Period readings in the former library at the Château de Brienne
– 18th and 19th September: European Heritage Days (free access to the Napoleon Museum)

Other exhibitions, free
– From 19 April to 19 May: Napoleon from every angle – Chapel of the Napoleon Museum – 34, rue de l’Ecole Militaire -10500 Brienne-le-Château: the purpose of this exhibition is to present the work done by children from schools in the Aube region involved in the PAG (Global Artistic Projects).
– From 5 May to 25 July: The Napoleonic legend and everyday life – Exhibition room of the Grands Lacs de Champagne Tourist Office – 1 rue Emile Zola – 10500 Brienne-le-Château.
– From 27 May to 19 September: Les écrivains et la légende napoléonienne (Writers and the Napoleonic legend) – Médiathèque – 2 rue de Loménie – 10500 Brienne-le-Château: the exhibition will present works donated to the Napoleon Museum and works by emblematic authors of French literature, contemporaries of Napoleon or from the end of the 19th and beginning of the 20th centuries. Alongside this exhibition, public readings will be proposed.
– Autumn 2021: Photo exhibition – Musée Napoléon, salle de la Chapelle – 34, rue de l’Ecole Militaire -10500 Brienne-le-Château: project in progress, including loans from the Musée de l’Armée – Paris.

Talks
All talks will be held in the second half of the year (dates to be announced).
– Maréchal Ney, by the Souvenir Napoléonien
– The last secrets of Napoleon, by Jean Tulard
– An imperial collection, by Pierre-Jean Chalençon

Spectacles
– 14 July: fireworks show in front of the chateau de Brienne (Empire and military music planned as well as a projection on the chateau facade)
– Date to come: 3 scenes on the 3 visits of Napoleon to Brienne (date and details to come).

Whilst this year commemorates the 200th anniversary of Napoleon’s death, the “Napoleon 1814 circuit” established in the Parc naturel régional de la Forêt d’Orient (Forêt d’Orient Regional Nature Park) commemorates the French campaign. The circuit is made up of 25 commemorative plaques presenting the high points of the French campaign of 1814 on the territory of the PnrFO, from Brienne-le-Château (battle of 29 January) via La Rothière (emblematic battle of 1 February), to the gates of Troyes. A leaflet listing the location of the plaques (“steles” in French) is available free of charge at the Grands Lacs de Champagne Tourist Office and at the Maison du Parc.

For any further information:

The town of Châteauroux, “ville impériale”

In partnership with the Berry-Val de Loire delegation of the Souvenir napoléonien.

More information on the website of the Châteauroux Métropole 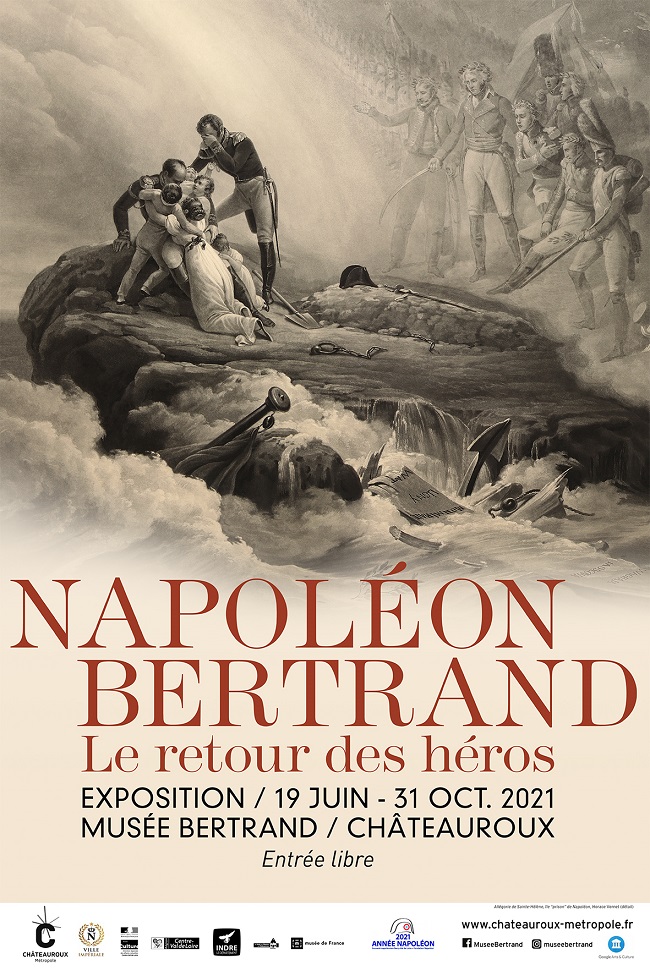 The town of Rueil-Malmaison, “ville impériale” 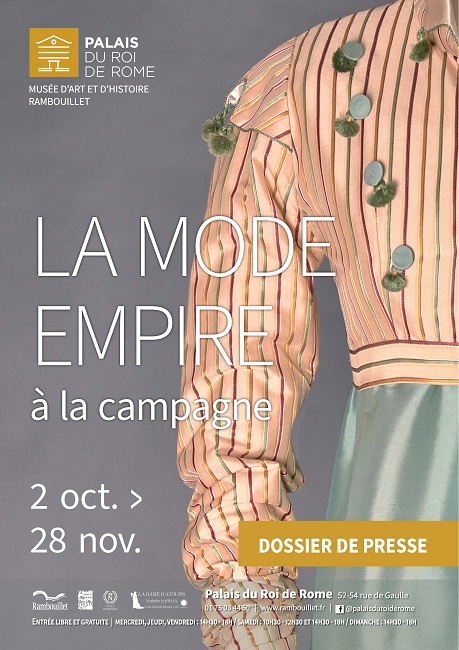 The town of Rambouillet (Ile de France region) will organise a weekend of re-enactment on 9 and 10 October 2021 and an exhibition “Empire fashion in the countryside” from 2 October to 29 November 2021 at the Palais du Roi de Rome.

In terms of fashion, the First Empire broke with tradition. After the audacity of the Incroyables and the Merveilleuses, a new aesthetic was imposed, strongly inspired by Antiquity.

This revolution in clothing mainly concerned the attire of elegant women, who abandoned for a time the artifices intended to shape the body and draped themselves in light, transparent fabrics. This new fashion also spread to the less wealthy social classes.

The exhibition designed for the Palais du Roi de Rome features a collection of reproductions of period women’s and men’s outfits, as well as accessories.

The town will be celebrating Napoleon the “hero beyond the grave” (debates concerts, films, theatre, readings…)  during the Journées Impériales (Imperial Days) organised by the city of Nice.

Exhibition > Napoléon, Chef de guerre, chef d’État [Napoleon, Warlord, Head of State]
Until 13 June 2021
The Musée Municipal de Saint-Germain-en-Laye is offering this exhibition to the public as soon as the museums reopen, depending on the sanitary conditions linked to covid-19. It is nevertheless available for virtual visits on the municipal museum’s website until 31 December 2021. A thematic programme around the exhibition is also available there. In Napoleon’s time, the Château de Saint-Germain was home to the imperial cavalry, as the exhibition reminds us.
Municipal Museum of Saint-Germain-en-Laye
2 rue Henri IV
78100 Saint Germain en Laye

Saint-Raphaël will mark the bicentenary of Napoleon’s death: its events will focus on the theme of Bonaparte’s landing in Saint-Raphaël on his return from the Egyptian campaign, with a temporary exhibition at the museum which will present Egyptian collections, a historical reconstruction of his landing, a colloquium with the greatest specialists and a show.

Art > Street Art
June 2021
The graffiti artist Codex Urbanus, whose fantastic bestiary adorns the walls of Montmartre, at the Château de Rueil Malmaison, the artist revisits the spaces where Josephine and Napoleon lived. In Saint Raphaël, he will be given a space on the wall of the Bonaparte garden, quai Nomy to work on.

Exhibition > Bonaparte et les sables du désert [Bonaparte and the desert sands]
6 July 30 October 2021
When Bonaparte returned from Egypt, he landed in Saint-Raphaël in 1799, while the scientific expeditionary corps continued its archaeological, historical, technological and sociological studies… A colossal work that revealed the secrets of ancient Egypt to the world and gave birth to the orientalist movement, to Egyptology. Collections of Egyptology, engravings from the Egyptian campaign, an original volume of the Description de l’Égypte, period objects, the model of the ship La Muiron, the copy of the Rosetta stone will be presented during this exhibition.
Musée archéologique de Saint-Raphaël

– Opening show
6 July 2021 – 9pm
Symphonic and polyphonic show “Nabulio”. Choir and orchestra (40 artists) with Didier Sandre from the Comédie Française on original texts by Napoleon, accompanied by a Corsican choir.
Agora of the Palais des Congrès

With sound and commentary by Walter Rocher and Alain Pigeard, doctor of history specialising in military issues during the First Empire.
Reconstruction of a bivouac, with the staff, a cavalry, a camel on the Diana spur. About thirty people in period uniforms will animate the beach by firing guns and cannons, and workshops, and parades.
– 11.30 am arrival of Napoleon by sea, reception by the garrison, the municipal authorities, personalities
– 12 noon parade will go in the direction of Place Coullet in garrison formation
– 2pm Parade of the garrison from the square to the Museum
– Every hour, a garrison platoon will move from the Veillat beach to the museum, passing through the centre, to liven up the town.
Participation of the local associations, the inhabitants of Saint Raphaël and the shopkeepers, with a special dress code: sailor’s jacket, trousers or long cotton dress in navy blue, espadrilles and Phrygian cap.
Veillat beach and museum square

– Heritage Days > Activities
Both days from 10am to 6pm
Presentation of the Napoleonic expeditions, handling of weapons, instruments, manoeuvres around the cannon, manufacture of cartridges.
Epi Diana

– Heritage Days > “Bonaparte, from Egypt to 18-Brumaire
Both days at 6.30pm
Show by the Lou Misteriou association on the life of Bonaparte at 6.30pm (16 artists; duration: 40 min.)
Museum forecourt

Môme en fête (kids’ days)
July and August – Wednesdays from 10am-12pm
During the “Môme en fête” event, the archaeological museum organises a treasure hunt in the town on the theme of Bonaparte’s return from Egypt.
Archaeological Museum

October 2021
A series of initiatives in partnership with the academic inspection will be proposed by the mediation team in connection with the youth sector of the Médiathèque, and the mMusée numérique Micro-Folies (digital museum).

Action by local associations: See the pdf summarising the events organised by the town of Saint-Raphaël (date: 25 March 2021) 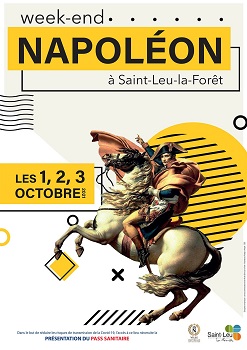 ► The programme in French

PrEsentation OF THE “Ville Impériale” BRAND

The “Ville Impériale” brand was created on 21 October 2011, on the initiative of the town of Rueil-Malmaison, and in partnership with the towns of Compiègne, Fontainebleau and Saint-Cloud.
The purpose of this association is to bring together all the towns that can justify, by their history and heritage, strong links with the First and/or Second Empire.
The aim of this “Ville Impériale” Brand is to give real historical and tourist visibility to the member towns and to promote the heritage linked to Napoleon I or Napoleon III. The network now includes 21 imperial cities and 5 partner towns and villages.