Created in the spring of 2013, the Fondation Napoléon’s Cercle d’études was renamed “Napoleonica® les conférences” in 2022, as part of the development of the Fondation Napoléon’s Napoleonica® academic program. The name has changed, but the objective is the same: to allow specialists in Napoleonic topics to present their work and reflections to an enthusiastic public, in a friendly atmosphere which encourages an exchange of points of view between historians.

Organisation and programme of events

Napoleonica® les conférences is presided over by Robert Bresse, formerly Director of the Musée de l’Armée, President of the Fondation de la France Libre since April 2011, and also a board member of the Fondation Napoléon since January 2015. Each year, there are three seasons of lectures, in spring, autumn and winter.

To send an e-mail

The wearing of a mask is no longer mandatory in most places welcoming the public (see details)  Everyone can, however, choose to wear a mask in the lecture room, for personal and/or collective reasons.

To attend lectures you must first sign up. Sign up begins at a precise date indicated in the programme: sign up requests received before this date will not be accepted. Your request will be confirmed by email.

Owing to the limited number of seats, sign up requests will be dealt with on a first-come-first-served basis. Given the high demand for places, those signed-up must attend the lectures, or give notice if they cannot do so.

The secretary of the Cercle is Michel Inglebert, and he is assisted by Emmanuelle Duprez.

To sign up to the talks and to request more information, you can contact us via email or by letter to the Fondation Napoleon. 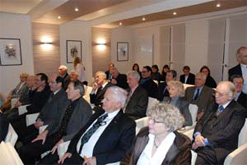 Lectures are held at