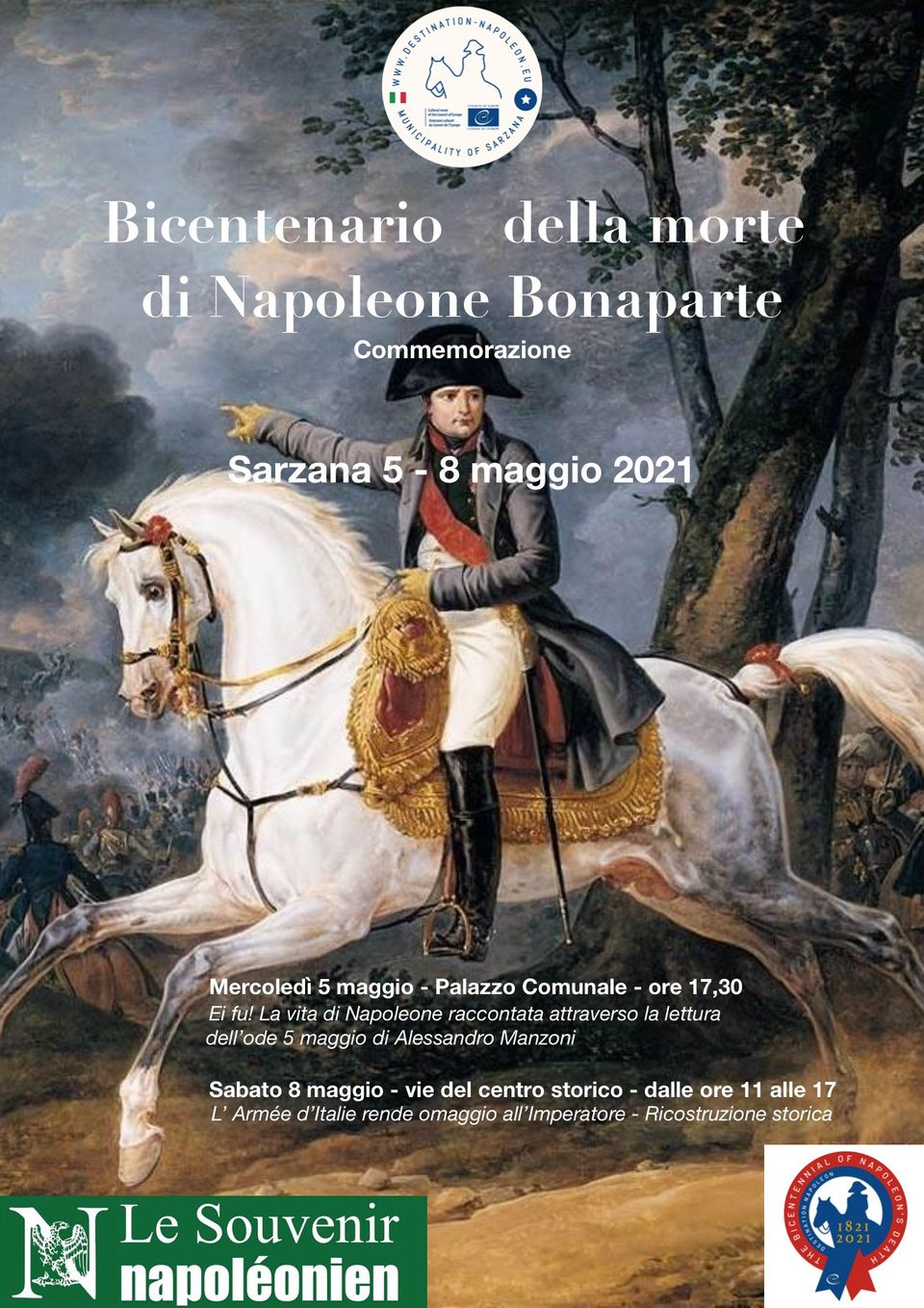 As part of the celebrations for the bicentenary of Napoleon’s death, the Ligurian delegation of the Souvenir Napoléonien is organising a series of events in the region.
Liguria is a region closely linked to Napoleon’s history: the Bonaparte family originated from the Ligurian town of Sarzana and emigrated from there to Corsica at the end of the 15th and beginning of the 16th century. “Madame Mère”, Laëtitia Ramolino, came from Liguria. Liguria was also part of the French Empire from 1805 until the Congress of Vienna. The town of Sarzana, which is part of the European Federation of Napoleonic Cities, was one of the first towns to plan a series of commemorative events.

Commemoration > Death of Napoleon
5 and 8 May 2021
Town of Sarzana
– On 5 May, in the Palazzo Comunale, at 5.30 p.m.: reading and commentary of the poet Alessandro Manzoni’s ode, “5 maggio”, recounting his life and glorious deeds.
– On Saturday 8th May, in the historic centre, from 11am to 5pm, in the presence of a hundred or so re-enactors dressed as soldiers and civilians from the time of the Empire, a parade will take place through the town to pay homage to the places linked to the Bonapartes in the town: the two well-known houses where Napoleon’s ancestors lived before migrating to Corsica, and the building where Charlotte, daughter of Joseph Bonaparte, Napoleon’s niece, died in 1839, with a commemorative plaque on the façade. Other events include: tableaux vivants.

Festival > 10th Napoleon Festival
23-26 September 2021
Town of Sarzana
Four days of events:
– “À table avec l’Empereur”, a culinary event where restaurants in town will offer Empire-period menus;
– on the 24th, 25th and 26th: historical re-enactment of a battle in the town between French troops and the allied Austrian and British troops (see below);
– other events are planned with the participation of schools and visual arts competitions and an antiques market for collectors.

Historical re-enactment
24-26 September
Town of Sarzana
– from 9 a.m.: opportunity to visit the troop camp at the Firmafede fortress
– 10.30 am: troops muster and march from the Firmafede fortress to Piazza Matteotti, where they are reviewed by the authorities. Short stops and return in parade to the fortress of Firmafede.
Programme under development.

Presentation of the Souvenir napoléonien

the Souvenir Napoléonien was created on 27 December 1937, and is the most important Napoleonic association in Europe, recognised as a registrered charity by ministerial decree on 5 November, 1982.

Throughout France and in some European countries, the Souvenir Napoléonien organises various cultural events, always with the aim of sharing and animating the history of the First Empire and the Second Empire. These two periods were the foundation of modern France in terms of institutions, law and education, but also in terms of culture, town planning and landscape art. These are all areas which contribute to the understanding of France’s specific identity, but also its place in Europe and in the world.

With its numerous delegations throughout France and Europe, the association Le Souvenir napoléonien represents 83 years of research and voluntary activities around the two Empires covering more than a century of French history.

The Souvenir Napoléonien delegate in Liguria is:
Federico Galantini