As part of the commemoration of the bicentenary of the death of Napoleon I, in 2021, Malmaison, the personal residence of Napoleon and Josephine as a couple and then of Josephine alone, is to host exhibitions and talks. 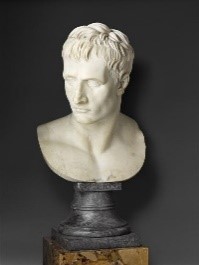 Exhibition > “Napoléon aux 1001 visages” [The True face of Napoleon]
5 May to 6 September 2021
Through the many representations of Napoleon, what were the true features of this legendary figure of French history?
If there is one recognisable figure among all of them, it has to be the one wearing a long frock coat topped by a large bicorn, that’s the one we know as Napoleon I. But behind these accessories, which are intimately linked in the collective memory to the Emperor’s personality, and beyond these images that are so often reproduced, what were Napoleon Bonaparte’s actual features? Was he the fiery young man with the emaciated features of the victor of Marengo, or indeed the hero that we might mistake as one of antiquity with the classical features that Canova carved out of marble? Only one image, realistic if ever there was one, is that provided by the death mask, which freezes for eternity, in the words of Malraux, “the permanence of Nothingness” [“la permanence du Néant”] and which exerts on us a “frozen seduction and fascinating serenity” [une séduction glacée et sérénité fascinante”]. Through the testimonies of his contemporaries, the portraits of the Bonaparte family, the multiple representations of the national hero, where is the true portrait? The exhibition offers a journey through the entire museum to discover Napoleon’s face, following the evolution of his features throughout his life and even beyond, through his legendary image.
► Read the press release (in French)
Exhibition curator: Isabelle Tamisier-Vétois. Invited guest: Philippe Charlier, French forensic doctor, anatomist-pathologist, archeo-anthropologist and paleo-pathologist.
► The virtual opening of the exhibition, with the  You-Tuber and blogger Scribe Accroupi will take place on 5 May at 7.30pm (French time) on the museum’s website and Facebook page and YouTube account.

Exhibition > Josephine’s dresses and beyond…
17 September to 18 October 2021, in the Salle des Atours (2nd floor of the Château de Malmaison)
Exhibition of a copy of one of Josephine’s dresses realised by the students of the Ecole Dupérré as well as contemporary interpretations of empire-style dresses made by the students as part of an educational partnership with the Ecole Dupérré, supported by Toshiba (sponsorship in kind) and the Signatures Foundation (financial sponsorship) chaired by Natalia Smalto. This project was led by Guillaume Dinkel and Sophie Chirico from the sponsorship unit of the Ministry of Culture. Céline Meunier, textile and jewellery curator at Malmaison, is the technical referent in the teaching team.

•Talk, Wednesday 6 October, 8:30 pm. By Céline Meunier and the Duperré school, at the Rueil Mediatheque

Exhibition > “Josephine’s porcelain collections, through the eyes of Setsuko”
13 October to 15 November 2021
How the personality of Empress Josephine and her taste for porcelain inspired the artist Setsuko Klossowska de Rola.
With the Empire, the art of ceramics, a symbol of a refined art of living, once again regained the place of honour it had lost with the Revolution and sumptuously adorned the table of the Emperor and Empress. As well as the economic support to French industry desired by Napoleon, the numerous orders that Josephine placed, both with the imperial manufactory in Sèvres and in private manufactories in Paris or abroad, demonstrate her real interest in this branch of the decorative arts. Her taste for nature and botany also inspired the ceramicists who provided her services. Setsuko Klossowska de Rola shares these two passions and her works, which draw their inspiration from the plant and animal world, are like an echo of the Empress’s collections. Link to page in French 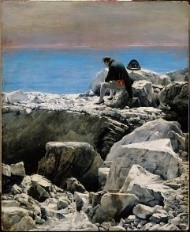 Exhibition > Oscar Rex, Peintre de la Légende napoléonnienne [Insights into the works of Oscar Rex]
24 November 2021 to 7 March 2022
Shortly before 1900, the Austro-Hungarian painter Oscar Rex (1857-1929) created a series of some thirty paintings on key episodes in Napoleon’s career. The Château de Malmaison holds several of these in its collection.
Oscar Rex was born in Graz in 1857, with Austrian nationality. He grew up in Prague and studied in Munich. In 1881, he moved to Paris, where he completed his training in the studios of Jules Breton and Mihály Munkácsy. Rex, a painter for whom history often borders on the anecdotal, inherited from his first master Julius de Benczur a taste for materials, fabrics and brilliance, and from Munkácsy a taste for bold colour and theatricality. Around 1900, he created some thirty paintings on the most important episodes in the life of Napoleon. The Château de Malmaison has several of these in its collection, which are both sober and “telling”, a fine example of the Napoleonic “narrative” that flourished in France and Europe in the 19th century.

Link to exhibition page on the website of the museum

The calendar of events.

The Château de Malmaison was acquired by the Bonaparte couple in 1799. From 1800 onwards, the house was the stage for a succession of work meetings, receptions, receptions, concerts, balls and games. Not only a private residence furnished in an elegant and refined consular style, Malmaison was also renowned for the beauty of its gardens and the rare species acclimatised there.