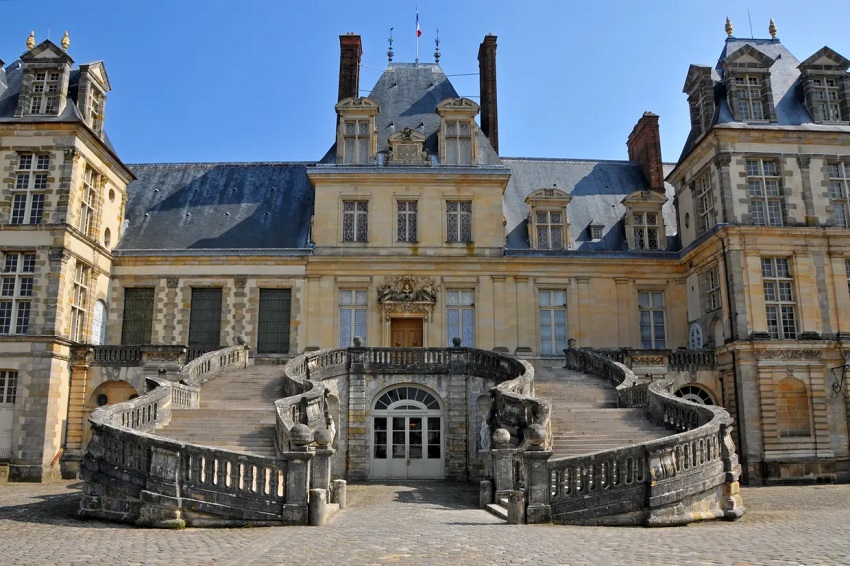 In 2021, the Château de Fontainebleau is commemorating the bicentenary of the death of Napoleon I with many highlights, notably: some historical re-enactment, a temporary exhibition “A Palace for the Emperor. Napoleon I at Fontainebleau”, as well as guided tours in the château and in the gardens. Virtual tours will showcase remarkable works that once belonged to the Emperor. Finally, the Musée Napoléon I will unveil numerous, recent, never-before-seen acquisitions.

For any questions about the events at this institution, please contact the museum.

All dates are likely to be modified in the current circumstances, please contact the institution for updates.

Presentation of the “improved” Musée Napoléon Ier
7 May 2021

► More about the exhibition

Fontainebleau experienced a particularly sumptuous period under the First Empire (1804-1815), thanks to the new lease of life given to the palace, which had been stripped of its furnishings after the Revolution, and also thanks to the brilliant life that took place there. A second renaissance was underway. During Napoleon I’s visits (1804, 1807, 1809, 1810), which were full of political and family events, the Emperor’s deep attachment to the palace was confirmed. By having the former home of the kings of France restored at great expense, under the direction of the architects Charles Percier and Pierre-François-Léonard Fontaine, the Emperor showed the eminent place he wished to give back to Fontainebleau among the other imperial residences, such as the Tuileries, Saint Cloud, Compiègne, Rambouillet, etc. The roofs were re-done, the interior decorations restored, the appartments extensively refurnished, the theatre renovated, the Louis XV wing fitted out for the princes, and the gardens renewed according to the taste of the time. Despite this uninterrupted activity, Napoleon’s work as a restorer, eminently respectful of the château, remains difficult to identify, especially as successive regimes, particularly the Restoration, have erased some of his contributions.

The aim of the exhibition is to highlight Napoleon’s work at Fontainebleau and to analyse the way in which the Emperor invested the château. More than two hundred works from the Fontainebleau collections (collections, libraries and archives), as well as from French and foreign public collections, reveal the sumptuousness of Josephine’s renovations, the luxury of the palace’s furniture, the Emperor’s extraordinary library, the transformation of the François I Gallery and the major projects abandoned after the fall of the regime.

The exhibition catalogue (in French) received a subsidy from the Fondation Napoléon.

Music at the château > Thomas Hengelbrock and the Ensemble Balthazar Neumann
17 – 26 September  > “Triumphal symphonies and funeral marches. Napoleon and music” and  “Napoleon and Egypt”

Details to be announced later

Programme of 2021 Année Napoléon at Fontainebleau (pdf) (in English)

PrEsentation OF THE MUSEUM > NapolEon I and Fontainebleau

2021: FONTAINEBLEAU COMMEMORATES THE BICENTENARY OF THE DEATH OF NAPOLEON I

Napoleon I brought the Château de Fontainebleau back to life after the Revolution. He had it restored and furnished and made into one of his residences. A visit to this monument is a chance to discover the different facets of the Emperor: the statesman, the warlord, the head of the family and the promoter of the arts. Fontainebleau is therefore a key stage in the history of Napoleon, and so the perfect visit in the anniversary year of 2021.

On the eve of his coronation in 1804, Napoleon Bonaparte decided to make the Château de Fontainebleau one of his residences. He then ordered the renovation of the palace in order to accommodate Pope Pius VII, who had come to crown him: the château was refurbished in just nineteen days. He would continue the refurbishment of this “jewel in the Crown” until the end of his reign. By taking up residence at Fontainebleau, the former artillery lieutenant who had reached the pinnacle of power wanted to follow in the footsteps of the monarchs who had preceded him. He saw this immense residence as an essential place to establish his legitimacy. He redesigned the gardens, luxuriously refurbished the Grands Appartements, and re-instated the traditional etiquette that had been one of the customs of monarchical life. The former King’s bedroom became the Throne Room, where one can find imperial symbols as well as emblems of the monarchy. The Petits Appartements [Small Apartments] on the ground floor bear witness to the private life of the Emperor and his two successive wives. This is where Josephine, who could not give him an heir, was informed of their inevitable separation. Later, Marie-Louise, pregnant with the future king of Rome, would take her quarters there. Fontainebleau is also a reminder of Napoleon the tireless worker. The administration of the Empire kept Napoleon I constantly busy, so much so that he had a bed installed in his study. It was in the adjoining salon that he signed his abdication in April 1814 before bidding his famous farewell to the Guard [the Adieux à la Garde] at the foot of the horseshoe staircase.

Today, the Château de Fontainebleau houses a museum dedicated to Napoleon I. The sword and the tunic he wore at the Coronation, the Emperor’s famous bicorn, his campaign furniture and the King of Rome’s cradle can all be found there. From room to room, portraits, busts and art objets depict members of his family, dignitaries and officers of the Empire, the chosen ones to whom Napoleon distributed the thrones and entrusted the administration of the kingdoms of Europe. In total, more than 700 works, most of them commissioned to serve the Emperor’s political project, tell the story of the dazzling Napoleonic epic.

FONTAINEBLEAU, A VOYAGE INTO THE HEART OF FRENCH HISTORY

Fontainebleau is a UNESCO World Heritage Site and the only château to be inhabited by all the French sovereigns from the 12th to the 19th century. A unique experience awaits visitors who wish to follow in their footsteps.

The Château de Fontainebleau is unique in France. The complexity of its architecture and the variety of its decorations bear witness to the times and tastes of the sovereigns who succeeded one another there. Stroll through the galleries, admire the frescoes and stuccoes of the Renaissance, walk down the serried apartments of kings and queens, and discover the solemnity of the Throne Room, all stages on this journey to the heart of history. Each room resonates with the memory of the sovereigns and their court. Following in the footsteps of François I, Henri IV, Louis XIII and Louis XV, Napoleon I also wished to leave his mark on Fontainebleau by restoring the château in the aftermath of the Revolution. His apartments and the museum dedicated to him constitute and display priceless testimonials to this imperial past. Fontainebleau presents Renaissance masterpieces, the refined interiors of Marie-Antoinette, Napoleon I’s ceremonial apartment and the “commodious” furnishings desired by Napoleon III and Eugenie. These monarchs were also aesthetes and invited the best artists of their time to shape this palace where family life, court life and the exercise of power coexisted. You can relive the residences of the Sun King, the royal wedding of Louis XV, and Napoleon I’s emotional farewell to the Guard on the horseshoe staircase. Nor should we forget the sumptuous balls organised during Catherine de Medici’s time, Marie-Antoinette’s promenades  in the gardens designed by Le Nôtre, the firework display over the Carp pond, and the water jousting on the Grand Canal. Napoleon said that Fontainebleau was the “true home of kings”. This chateau embodies like no other the marriage of pleasure and power, intimacy and politics. Walking through its galleries and gardens, the visitor sees eight hundred years of art and history unfold over the course of a single day.