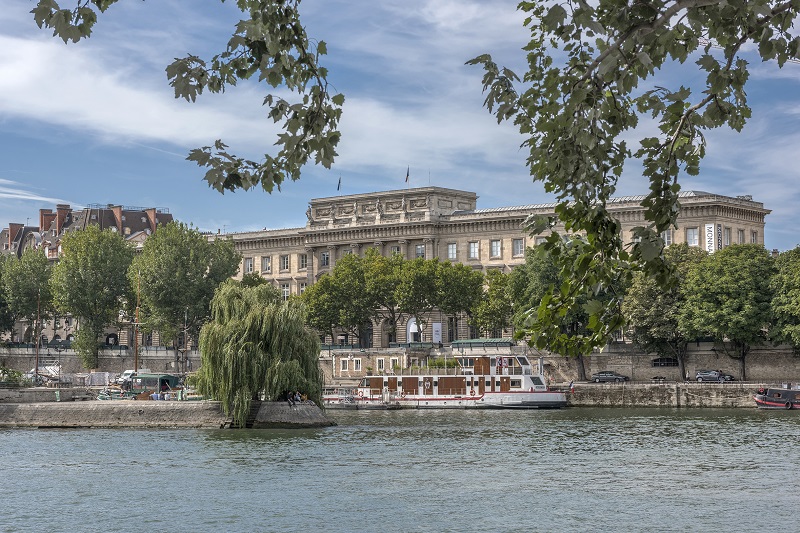 In 2021, the Monnaie de Paris will commemorate the death of Napoleon I via an exhibition presented in its museum.


For further information, please consult the website of the Monnaie de Paris.

For questions regarding events at this institutions, please contact the Monnaie de Paris.

The exhibition “In the footsteps of Napoleon I at the Monnaie de Paris” invites visitors to discover both the artistic, technical and scientific role of the Monnaie de Paris during the Directoire, the Consulate and the Empire and its role in the construction and dissemination of the Napoleonic legend during the July Monarchy and the Second Empire.
The public is invited to follow in the footsteps of the Emperor in a fun and educational tour that will encompass the entire Monnaie de Paris site, combining architectural details, the history of the institution, the History of France, the Napoleonic legend, heritage objects from our collections and the savoir faire of our craftsmen and technicians.
The exhibition aims to show that during the Consulate, the Monnaie de Paris became the centre of the First Consul’s ambitions in monetary matters. His visit to the Quai de Conti on 21 Ventôse year XI (12 March 1803) was one of the high points of the history of the Germinal Franc. The scientific and technical staff, artists and craftsmen who worked in this workshop, set up under the Ancien Régime, combined their talents to produce an exceptional coinage with the ultimate aim of building a new France.

The exhibition is composed of 400 works: coins and medals, monetary and medallic tools, but also sculptures, paintings, drawings, decorative arts objects and archival documents. The works originate from the collections of the Monnaie de Paris and important French public collections: the Louvre, the Musée de l’armée (Army Museum), the Carnavalet Museum, the Institut de France, the Fondation Napoléon, the Château de Fontainebleau, the Châteaux de Malmaison and de Bois-Préau, the Château de Versailles, the Thomas Henry Museum in Cherbourg, the Denon Museum in Chalon-sur-Saône, and the Archives of the French Ministry of Finances.

The exhibition is also divided into five focal points. The first one highlights the main engravers who worked under the direction of Dominique Vivant Denon. The second is the stylistic evolution of Napoleon Bonaparte’s effigy on his coins and medals, in order to understand its importance for imperial propaganda. A third point focuses on the heraldic and symbolic figure of the Imperial Eagle. A fourth centres on the diplomatic importance of the visits of sovereigns and members of Napoleon I’s family to the Monnaie de Paris. Finally, the fifth focal point shows the creation of the Order of the Légion d’Honneur and the way in which the art of the medal illustrated its impact on the society of the time.

As part of the Bicentenary of Napoleon’s death, the Monnaie de Paris is launching an exceptional collection of commemorative coins.

On 27 April 2021, the inaugural coining of one of the highlights of the collection took place, a silver coin with a face value of ten euros, in the shape of a bicorn, decorated on both sides with Napoleonic symbols. Joaquin Jimenez, “Graveur général” [Head Engraver] of the Monnaie de Paris, chose Napoleon’s famous hat as the object that carries “all the allegories and symbols of the Napoleonic heritage”. To make a coin in this unusual shape requires the expert know-how of the craftsmen of the Monnaie de Paris who use a specific tool to cut planchets (blank coins, sometimes also known as flans) to respect perfectly the final shape which is contained by a special ferrule during the minting process. In addition to these elements, the matrix also in the shape of a bicorn is ready to strike this uniquely-shaped coin.

On the obverse, representing in relief the bicorn with its cockade, are three grenadiers of the Imperial Guard, a cross of the Legion d’Honneur and a personification of the Civil (also known in English as the Napoleonic) Code with the dates “1821” and “2021”.
On the reverse, an Imperial Eagle surrounded by the rays of the “Sun of Austerlitz”, a laurel wreath (which also forms the “0” of the value, namely, 10 euros) encircling the Imperial N, and the silhouette of the Emperor, all on a background of bees.

► Take a look at the entire collection of coins commemorating the Bicentenary of Napoleon’s death on the website of the Monnaie de Paris.

Discover the secrets of the manufacture of this unusually-shaped coin in this video.

PrEsentation of the MONNAIE DE PARIS

Founded in 864, the Monnaie de Paris [Paris Mint] is the oldest French institution and one of the oldest companies in the world. It provides the public service of minting current euros for France and other foreign currencies. For twelve centuries, it has cultivated a high tradition in the art of metalworking. It was the first ever factory to be built in Paris, it is today the last one in operation and indeed its artistic productions are still carried out in its historic factory on the Quai de Conti in Paris.

Since 2017, number 11 quai Conti has been largely open to the public. In its exceptional neo-classical building, arranged around crossing courtyards, stands a museum dedicated to the arts of metalworking, presenting the institution’s collections (170,000 artefacts) and indeed the intangible heritage represented by the crafts and the centuries-old savoir faire of the craftsmen at the Monnaie de Paris. In addition to the museum, temporary exhibitions are often organised in the historic salons and as well as a programme of events.