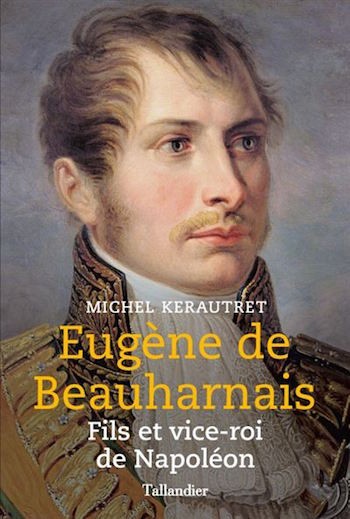 
Eugène de Beauharnais (1781-1824), was little-known hero of the Napoleonic epic. He was born of the first marriage of Empress Josephine to General de Beauharnais, who was guillotined under the Terror. He became Napoleon’s adopted son, viceroy of Italy, army chief, German prince, and as such held a central and original place in the imperial world.
It was his mother’s meeting with Bonaparte that would determine his life. Napoleon showed Eugene great affection, educated him, trained him in war and politics, married him to the daughter of the King of Bavaria and solemnly adopted him in 1806. He prepared him to succeed him by delegating to him the government of Italy as viceroy and by entrusting him with the armies. In these roles, Eugene showed his worth and seemed destined to govern the Empire one day or to assume the regency for the King of Rome. Fate decided otherwise when Napoleon had annuled the marriage Josephine, remarried Marie-Louise and the Aiglon was born.
Eugène de Beauharnais was the only member of the imperial family who perfectly matched the Napoleonic ideal of social fusion and European integration. He was very popular, and left an image combining the seriousness of the statesman in Italy and the bravery of the French soldier in Russia, with gaiety, youth, and also a very romantic love affair with his young wife. His numerous descendants made Eugene the ancestor of almost all European sovereigns.

Read an interview with the author 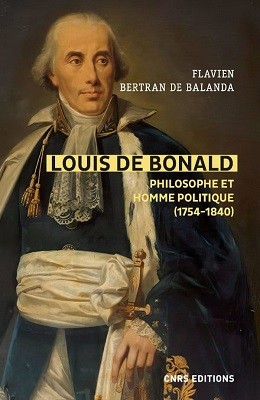 
Louis de Bonald was a champion of outdated times, a figurehead of nostalgia of the most indigestible kind, a morbid voice from a dusty past: It is the posthumous recuperation of Bonald by the extreme right and as a theorist of radical conservatism which have contributed to casting him in the role of a thinker who was thought to have deplored the order of the Ancien Regime. A man who was already behind the times and out of step with his century. It is certainly a challenge to take on the author of the Théorie du pouvoir politique et religieux (1796) [Theory of Political and Religious Power (1796)], a herald of the Church whose name has remained attached to a law on the abolition of divorce (1816), and attempt to release him from this too univocal reading in order to question his paradoxical modernity. Nevertheless, in this book, we discover a child of the Enlightenment,  fully involved in the post-revolutionary upheaval, mayor of Millau before and after 1789 and thereafter a self imposed exile. He was a tireless publicist, later recognised as a precursor of sociology, an academician and a respected member of parliament: a major intellectual figure of the early 19th century. Drawing on archives and unpublished material, as well as forgotten texts and speeches, this innovative and lively portrait places Bonald’s attitudes within the context of events. It brings to light his sharp eye on his time, his hopes and his disappointments, and highlights the philosophical and political project that guided him along a difficult path: this project did not promote the restoration of an idealised past, but rather a political and social regeneration that was still to come.

Flavien Bertran de Balanda is a researcher at the École Pratique des Hautes Études and an associate researcher at the Centre d’Histoire du XIXe Siècle. For this work, he received a Fondation Napoléon grant in 2010, and the Maison Auguste Comte thesis prize.

Presentation in French on napoleon.org