Doctor in history and law, specialist on First Empire military matters, Alain Pigeard has here brought together all the details known about the running and organisation of the renowned army which Napoleon created in 1804. A work of research, this dictionary is the product of thousands of hours of work patiently gathering together diverse widely-scattered details.

As it explains everday objects, strategical and tactical theory, people, equipment, units, the dictionary is a journey through the Napoleonic military epic.
Finally, the book also includes a presentation of one hundred of the most important Napoleonic battles, giving details on the forces present, the topography, the weather, the order of combat and the report of a ‘participant’


Dorothée, Princesse de Courlande, was just fifteen when in 1808, under the combined pressure of the Tsar Alexander I and Talleyrand, the Duchesse de Courlande gave the hand of her daughter to the Comte Edmond de Talleyrand-Périgord, nephew of Napoleon’s minister and future Duc de Dino by the grace of the King of Naples. When Talleyrand became Louis XVIII’s Minister of Foreign Affairs, he brought his niece with him to the Congress of Vienna. Sovereigns and diplomats were won over by the beauty, charm, intelligence and culture of the young lady.

The author has worked using previously unknown source material held in the archives of Riga – capital of Latvia, of which the Duchy of Courland was part – Poland, the Czech Republic, and the University of Iena: this book sheds new light on the woman who was a benign influence upon Talleyrand in the last twenty-five years of his political, diplomatic and social life.

PRIZE FOR A BOOK IN A LANGUAGE OTHER THAN FRENCH

Luigi MASCILLI MIGLIORINI, Napoleone, Roma, Salerno Editrice
“It would have been better for the peace of the world if I had never been born”. Napoleon’s visit to Ermenonville and the sites dear to the idol of his youth, Jean-Jacques Rousseau, drew this unusual confession from Napoleon already a good way on in his human adventure. Indeed, Napoleon himself was aware of the fundamentally uneasy nature of this adventure, itself the product of an era of great breaks, great revolutions, and the product of a specific character driven in the search for the hidden sense for existence.

Years later, on Saint Helena, Napoleon experienced days no less extraordinary than those of the years of triumph, and appeared to his entourage like a “modern Prometheus “, in other words, the Greek tragic hero who made the ultimate challenge to the goods, whilst nevertheless sensing the impossibility of ultimate success, and yet continuing to head towards new frontiers and new horizons. Here we have Napoleon as the archetype of modern man, well aware of the precarious nature of existence whilst at the same time fascinated by the permanent search for limits and daily going beyond those limits, driven by a passionate desire to break every mould. No surprise then to learn that this European protagonist in the decisive passage from the 18th to the 19th century, has been the source, over the last two centuries, of mythologies and mirrorings, the perpetual work of critical reflection as well as narratives, visual stimuli and metaphors which have fed the collective imagination of the old and new worlds.

This volume attempts in particular to take account of the rich strata of interpretation which time has accumulated around the Emperor. But it also tries to illustrate the man who, with his complex contradictions, was called to take on an epoch no less complex and contradictory. As such it is the first attempt by an Italian historian to understand the Napoleon in the context of his total human experience. 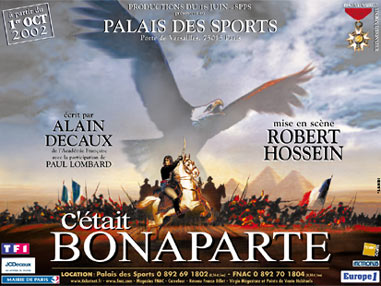 PRIZE FOR AN AUDIO-VISUAL WORK

The result of 27 years of collaboration between Robert Hossein and Alain Decaux (Le Cuirassé Potemkine, Notre-Dame de Paris, Danton et Robespierre, Les Misérables, Un homme nommé Jésus, Jules César, L’affaire du courrier de Lyon, Dans la nuit la liberté, Jésus était son nom, Je m’appelais Marie-Antoinette, De Gaulle 40 / 45 – Celui qui a dit NON), C’était Bonaparte comprises about fifty scenes showing the extraodinary rise to power of Napoleon Bonaparte, from the First Italian Campaign, to the coronation in Notre-Dame in 1804. When in 1799 France was emerging, exhausted, from the revolutionary torment, the creation of the Consular regime in 1800 and the general peace signed with Britain at Amiens in 1802 marked the beginning of a period of calm, making it possible for institutional and administrative modernisation and economic success, namely: the Code civil, the Banque de France, the Bourse de Paris, the Chambres de commerce, the Préfectures, but also the Légion d’honneur, the Lycées, the Gendarmerie nationale,. the list is long!

C’était Bonaparte is also about enthusiasm, passion, driving oneself to the limit and beyond, the desire to defend the ideals of the French Revolution throughout Europe, as seen most notably through the Italian campains and the military and scientific expeditions to Egypt.

“Bonaparte comes in through the back door and takes up a position at the centre of the world. Strategist and diplomat, he was to amass both victories and defeats, whether political, military or personal. And exceptional reformer, he completely changed the way France had traditionally operated. His ‘grandeur’ fascinates me, his fidelity is remarkable, his trajectory leaves me speechless, his fragility in love moves me. The banners which flap above the drums whirl me into the exceedingly rich moments of our history..” R. Hossein

In 1970 he left Paris to direct for eight years the Théâtre Populaire de Reims. He there built the foundations of a theatre which he characterised as “the theatre which you only see at the cinema”.

He was soon to add more, very original and interactive shows using projected images (a procedure unknown at the time).

According to Le Monde, his works have “been written with such skill that here popularisation has been raised to an art form”; for Figaro magazine, there is “noone like him who can make an issue clear as a bell in thirty pages, which others would take six hundred pages to scramble”; for L’Express he is the “image and the voice of history” for the French.

His radio programme, La tribune de l’Histoire was broadcast on France-Inter for 46 years (1951-1997). On television he began with La caméra explore le temps (1956-1966). This was followed by Alain Decaux raconte (1969-1988): alone in front of the camera for an hour, he would describe an episode or historical character. This programme was awarded the Prix de la Critique de Télévision, the Oscar de la télévision and the Trophée de Télé 7 jours. Alain Decaux has also written for the theatre (10 plays) and the cinema (4 films).

Entering the Académie française in 1979, he became Membre du Haut Conseil de la Francophonie in 1985. From 1988 to 2000, he was president of the Association française d’Action Artistique (AFAA). Since 1998 and his election by the Institut de France, he has been president of the Collège des Conservateurs for the Domaine de Chantilly.