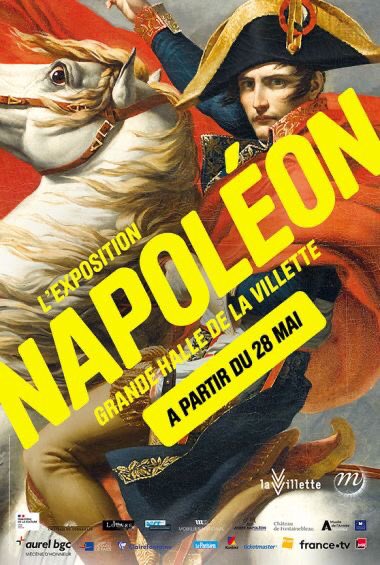 The Réunion des Musées nationaux – Grand Palais, La Villette and Re / Adonis are joining forces to propose a major “Napoleon” exhibition at the Grande Halle de le Villette as part of the bicentenary of Napoleon’s death.

Marking the bicentenary of his death, the Napoléon exhibition explores the unlikely story of a complex character who was at once admired and controversial, victorious and conquered, heroic and tragic; a dramatic story that continues to fascinate our contemporaries to this day. It will highlight his political and cultural legacies that have profoundly impacted certain countries, chief among them France, as well as the mistakes he made.

►From the historical character to the private man: every facet of his life

This exhibition is built around the following themes: the formative years at the Brienne military school; the campaigns in Italy (1796) and Egypt (1799); the Coup of 18 Brumaire and the Consulate; the emergence of the Empire; Napoleon the private man, his women, Josephine then Marie-Louise, his legitimate son, King of Rome; Napoleon, the military leader; Napoleon and Europe, at the head of which he placed his brothers and sisters; the decline of the Empire, illustrated by two military failures, the Spanish campaign (1808) and the Russian campaign (1812); the Hundred Days and his final fall after the Battle of Waterloo. Prestigious guests will give talks on various subjects, bringing an additional perspective to that of the curators.

Themes include morals and religion, explored by Jacques-Olivier Boudon, the exercise of power with Thierry Lentz and the life and death of soldiers with François Houdecek. A short film by Mathieu Glissant will be screened in a section of the exhibition on the re-establishment of slavery.

►The arts and court life through a host of masterpieces

Spectacular reconstitutions will showcase the arts and court life in an era that, though brief at just fifteen years, would have a lasting impact on the decorative arts. Following the Egyptian campaign, pieces of furniture and objets d’art designed in the Egyptian style will be presented, while another room will illustrate the way style evolved at the height of the Empire. A throne room stands alongside a table laid with the most opulent productions. These spaces will be complemented by magnificent court garments, weapons of luxury, decorations, Sèvres porcelain, a selection of goldsmithery and even a monumental carriage commissioned for his marriage to Marie-Louise, as well as the humblest funereal carriage used for his burial on Saint Helena.

Added to these are some of the Emperor’s personal items, as well as the spectacular campaign tent with its original furnishings. War will not be absent either, with a cannon, an ammunition crate, several mannequins and a giant screen with a projection of one of the most famous cavalry charges in the history of France, at the Battle of Eylau. Not to mention the many sculptures that will accompany paintings by the greatest painters of the era, such as David, Gros and Gérard.

►Read an interview with one of the curators Arthur Chevallier: “Napoleon is not just linked to political history; he can also be a role-model” (napoleon.org January 2021)

Opening times:
Everyday from 10am to 7pm

Information and reservations: expo-napoleon.fr (in French)

Press Release including a sneak preview of some of the treasures on show.

AROUND THE EXHIBIT (links in French)

PrEsentation OF THE RMN-GRAND PALAIS

The Réunion des musées nationaux – Grand Palais is a cultural operator whose mission is to promote access to culture throughout France and beyond. It brings together expertise that enables it to take a cross-disciplinary look at the challenges and needs of museums.

The Rmn – Grand Palais has a range of recognised expertise in the artistic and cultural field: exhibition organisation, reception of the public, mediation, publishing, management of museum shops, art workshops, photographic agency, acquisition of works of art for national collections, cultural engineering… These enable it to play a unique role on the museum scene, with one ambition: to encourage the greatest possible number of people to come into contact with art, the art of all cultures, all periods and in all its forms.

The Grand Palais in Paris is the emblem of the institution: the Rmn – Grand Palais exercises many of its skills there, including the production of major exhibitions and cultural events. In Paris, at the Musée du Luxembourg, and throughout France, in 15 museums under national jurisdiction (SCN), it deploys its skills in welcoming audiences, mediation and exhibition co-production.

A place of culture(s) as much as of nature, the “Établissement Public du Parc de la Villette” and the Grande Halle de la Villette (EPPGHV) is located in the north-east of Paris, in the 19th arrondissement. The Parc de la Villette covers an area of 55 hectares of parkland, home to the Grande Halle and the Halle aux Cuirs  [events centre] the Cité des Sciences et de l’Industrie [Museum of Science and Industry], the Géode [a 360-degree cinema], the Zénith de Paris [Rock concert hall], the Conservatoire National Supérieur de Musique et de Danse de Paris, the Paris-Villette Theatre and the Cité de la Musique-Philharmonie de Paris.