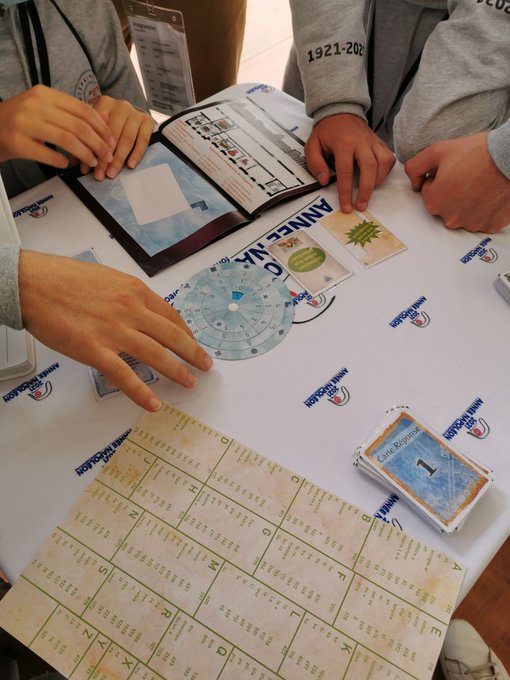 On 26 September 2021, more than a thousand young people and their guides gathered in the central “Cour d’Honneur” courtyard of the Hôtel National des Invalides (Paris 7th) to take part in the Young People’s ‘Olympics’, organised by the Société des Membres de la Légion d’Honneur [SMLH, Society of Members of the Légion of d’Honneur] to celebrate its centenary, under the patronage of Emmanuel Macron, President of the French Republic.

78 partners, promoting one of three themes – Solidarity; Values and Commitments; Trades and Apprenticeships – organised challenges to be solved in teams. The Fondation Napoléon’s stand received eight successive teams. The challenge they faced was to prevent an attack on Napoleon by deciphering a coded message from the spy, Michel! The members of the winning team each received a copy of the catalogue of the exhibition L’art au service du pouvoir, Napoléon I et Napoléon III [Art in the Service of Power: Napoleon I and Napoleon III]

From May to September, an individual challenge, in the form of a quiz, was proposed by the partners online.
Find the two quizzes (in French) produced by the Fondation Napoléon on our website napoleon.org ► Napoleon I (1769-1821) history, heritage, in 15 questions/answers and ► Getting to know the Fondation Napoléon, its missions, its activities.

For a hundred years, the SMLH, a recognised public utility association, has been contributing to the strengthening of national cohesion, in particular from an intergenerational point of view, and of social ties in all their forms. The commitment of its 45,000 members, donors and partners in France and abroad is part of an approach that is supportive, civic-minded and open to society and its future. Drawing on the rich variety of projects initiated by its members in the 128 French departmental sections over the decades, the SMLH 2030 project has set up four priority activities as national causes:
– intervention in schools and training establishments on the themes of civic education, the promotion of republican values and the transmission of memory;
– support for the development of apprenticeship and vocational training;
– support for deserving young people;
– support for candidates for French naturalisation.

Our newsletter on all things Napoleonic (our latest news and our digital output, the Napoleonic World, etc.). Sign up here – it's free!