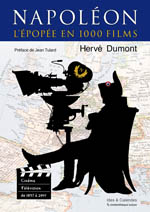 In 2015, the Jury of the Prizes and Grants of the Fondation Napoléon awarded the Prix du Jury to Hervé Dumont, former director of the Lausanne Film Library and film historian, for his work presenting and analysing films devoted to Napoleon I and his reign, Napoleon. L’épopée en 1000 films [Napoleon, the saga in 1,000 films] published by Ides et Calendes (Lausanne).

On that occasion, he kindly gave this interview for napoleon.org in which he shared his passion for cinema and history, as well as history in cinema, and gives an in-depth analysis of audio-visual Napoleonic productions across the globe.

Five years later, Hervé Dumont has made his immense tome (680 pages) Napoléon, l’épopée en 1000 films available online for free, What’s more, the new section of his Encyclopedia of historic film covers all the cinematic and televisual productions devoted not only to Napoleon and his era, but also to the whole of the 19th century.
The presentation pages, authors notes and general guide to its use are bilingual (French-English) and with the help of an automatic translator the contents of this fine resource will surely be accessible to all.